Calling all Cannonballers! Submit Your Best/Worst of CBR14 by Saturday December 10!
> FAQ Home
> Genre: Fantasy > Airships and mercenaries and bandits and adventure 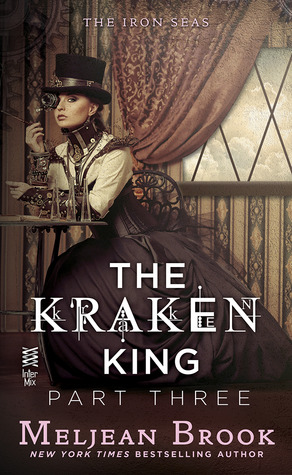 Because The Kraken King is being published in eight weekly instalments, I’m going to blog the first four as one book, and the final four as another, mainly because I don’t want to wait until I’ve read all the parts to share my feels so far. So to anyone reading – be aware that there is more to come.

Zenobia Fox is used to a quiet life in Fladstand (on the north-East coast of what we’d know as the US). The only bursts of any kind of excitement are when she occasionally gets abducted and held for ransom, because her brother is a tremendously wealthy adventurer and explorer, married to a ruthless and fierce airship captain (see Heart of Steel). Zenobia is the woman who chronicles their adventures, in stories everyone believes to be fiction. Her childhood friend Helene, however, knows nothing of her secret life as an author, and believes her to be a widow very conscientious about her correspondence. She asks Geraldine (Zenobia’s real name) to accompany her on a journey to Nippon (Japanese-controlled areas of what we’d know as Northern Australia.) and Zenobia eagerly accepts. It will give her a chance to see some of the parts of the world she’s only ever read about in her brother’s letters, and ideas for her new stories.

At first, everything seems to be going well, with Zenobia’s mercenary bodyguards posing as her maid and late husband’s valet. When the airship they are on is shot down by bandits, Zenobia gets to experience more adventure than she had hoped for. Full review.