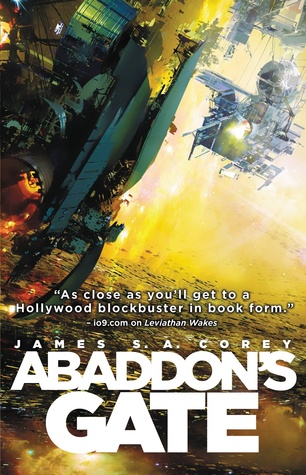 The day I finished reading this book, the news broke that SyFy had optioned The Expanse as a TV show. It was quite auspicious timing, especially since the third book had done wonders for my excitement over the future of this series.

Abaddon’s Gate is the third book in James S.A. Corey’s* Expanse series, and it’s my favorite of the series so far. I am probably going to spoil them (probably meaning definitely), so don’t read any farther if you’re planning on reading. The first two books in the series, roughly, covered a mysterious disease that turned people into vomit zombies (yes, really), but which turned out to be an alien protomolecule on a mysterious two billion year journey that had been weaponized by corporate assholes (because of course it was those guys). The first book ends with the protomolecule basically liquefying a million people and then flying off and landing on Venus to grow and do who knows what. The second book, among other things, ends with a ring-like structure rising up off of Venus and flying out to sit permanently just outside of Saturn’s orbit. Nobody knows what it does or what it’s planning. That is the central mystery of the series, and it is gradually unfolding.

*James S.A. Corey is a penname for Daniel Abraham and Ty Franck.

There are two to four POV characters in each book, but the one who’s been with us from the beginning and is arguably the main character is James Holden. Former military, he now captains a Martian salvage vessel crewed by fellow renegades in the Outer Planets. Because of all of his actions, he’s now rather infamous throughout the solar system. Holden has been a central mover in all things protomolecule, especially since the protomolecule consciousness or whatever is now prancing around wearing the form of the other POV character from book one, who has been dead for years. Confused? Well, I wouldn’t blame you since I’m intentionally being obtuse*, but it’s amazing how far clear language and rising plot tension can make the weirdest (and most disgusting) things acceptable in a narrative. Seriously: VOMIT ZOMBIES.

*A really helpful quality in a reviewer.

So this one follows Holden and three new POV characters: Anna the preacher; Bull, a leader of the OPA (Out Planets Alliance); and Melba/Clarissa, a very angry girl out for revenge, as humanity makes a journey out to the ring to see what the fuck is up. Holden and crew are there because a documentary crew offered them a lifeline when Mars tried to take back their ship, the Rocinante (and because Holden is secretly having visions of Miller, the man who was co-opted by the protomolecule in book one). Bull is there as Security office of the Nauvoo, the Mormon generation ship the OPA recquisitioned back in book one — he should be Captain, but the leader of the OPA didn’t want an Earther as Captain because space racism is a thing. Anna is there because a religious delegation chose her to be, and the ring is scaring the shit out of people all across the solar system. And Melba . . . well. She has issues, and it’s complicated. Basically she blames Holden for all the problems in her life and she has lots of money and decides to use it to ruin his life, and LOTS of other people’s as a result. Her journey for revenge is even more the catalyst than the journey to the ring. All of their storylines collide disastrously. Blood and chaos and mysterious alien space stations that are probably in Dyson spheres or something? and also MURDER.

As I mentioned above, this is my favorite of the books. Not as scary as book one, but with just as large a scope (actually: way larger). Book two was kind of blah for me, with the exception of the delightfully foul-mouthed old lady Avasarala, but this one was like reading a really good movie thriller. The writing is actually very cinematic, which is one of the reasons I disagree with anyone who calls this Game of Thrones in space. Aside from both of them not shying away from violence and being concerned with complicated human motives, they really don’t have very much in common. An Expanse book usually takes place over a span of weeks or days (a condensed time period), whereas the ASOIaF books are anything but condensed in any sense of the word. I also really like the way the protomolecule story is going, how something so terrifying in books one and two turns out to be so not what I was expecting (spoiler: a gate to a space station with gates to many, many more worlds).

Not to say the book was perfect. It was really, really frustrating to be in Melba’s head at the beginning because she was blaming Holden for all her shit that wasn’t his fault, and there wasn’t enough context for why she would so stubbornly hate him instead of her father (the clear culprit). It’s not that it couldn’t have worked and made sense, but I had to do guesswork and make assumptions to get there. It’s not in the text. We needed more justification for her (outrageous and psychotic) behavior. Especially since the narrative wants to redeem her by the end.

Looking forward now to both the TV show and the fourth book, which is going to be published later this summer. Also: curious about how they’re going to portray the people of the Outer Planets (Belters), as they all have large heads and elongated bodies. Are they just going to ignore that, or are they going to be doing some mega-CGI? Will be interesting to find out.