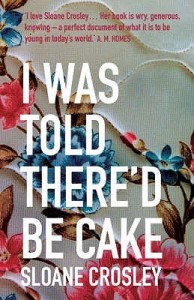 I admit, a good 90% of the reason I wanted to read this book was the title. It’s a genius, a masterstroke in fact. But ultimately it turned out to be, if not quite the high point of the book, it was certainly one of the very few noteworthy moments. Don’t get me wrong, I really enjoyed this, but when something is described as “wry, hilarious and profoundly genuine” and has a gushing jacket quote from A.M. Homes, well, you’re setting the bar terribly high for yourself. For me, Crosley fell short.

It’s not that she’s not funny. I often smiled and chuckled, occasionally she made me laugh out loud. When she’s “imagining how embarrassing it would be to explain that one’s death – or worse, one’s disfigurement – came from a flaming maxi pad to the face”, it’s hard to deny that Crosley has a way with words. I almost feel a little mean to take her to task for writing it, but there we are. She didn’t manage to convince me there was a reason to write the collection of essays that make up the book. There’s nothing unusual about them, and I guess that’s the point. Homes’s comment is that this is “a perfect document of what it is to be young in today’s world”. Maybe it’s that I’m not young, and I’m heading ever faster towards yelling at those pesky kids to get the hell of my front lawn, or maybe it’s just that Crosley really isn’t as interesting as she thinks she is. The sum total of this, rather than making me go “oh that Sloan Crosley, she’s such a wag” had me saying “you know who else was too involved in a wedding they had no desire to even be at? EVERYONE”.

Crosley is INTENSELY interested in the minutiae of her own life, and it does get wearing. David Sedaris, whom I would guess Crosley idolises and hates in equal measure is entirely fascinated with other people and has a unique take on what he observes. And that is what makes him worth reading. I got to the end of I Was Told There’d Be Cake and just thought “so?” along with “wow, you would not be my friend in real life. You’re kind of annoying.”

This and all my other CBR reviews are on my blog here.