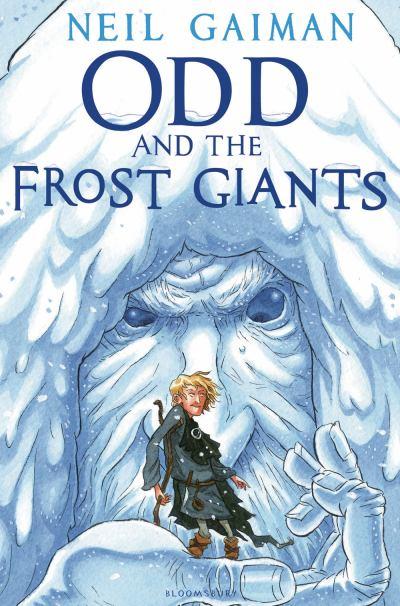 For Odd’s village, winter seems like it will never end – more so than usual, that is. It is especially tough on Odd, who doesn’t quite fit in with his village, and at last he resolves to set forth into the wintry forest to figure out why spring does not come. When he runs into a bear, an eagle, and a fox, he is swept into a mystery and another world – the world of Asgard, where the Norse gods are dealing with an angry frost giant.

I didn’t realize that this was Gaiman-for-children until I began reading, but it didn’t lessen my love for it at all. After all, I adore Coraline and The Graveyard Book… especially The Graveyard Book. Odd and the Frost Giants was perfection as well – which shouldn’t have come as a surprise. After all, it is Gaiman, and I don’t think I’ve ever read anything of his that I wouldn’t give 5 stars.

I read this in an evening – unsurprisingly; it is quite short. It was all the better for its brevity. Odd was a lovely, thoughtful protagonist in this world of feisty butt-kicking MG/YA protagonists. Like many Gaiman heroes, he is brainy rather than brawny, but his solution to the Asgardian’s problem was enchanting. I smiled often while reading it, especially at the delightful animal forms of Thor, Odin, and Loki and their interactions with each other. It’s not the sort of book that surprises. It enthralls in a more peaceful way, and its ending was charming as well.

This is a wonderful introduction to the Norse world for children. I think my little sister (age 6) may be a tiny bit young for it right now – a pity, because it is a perfect book to read during this cold and seemingly never-ending winter. My mother, who homeschools her, says they will be doing mythology in a year or two, so it would be better suited for then. By that time, she could read it herself – and I’m sure she would love it. She might not get all the references, but they are not necessary to enjoy it.