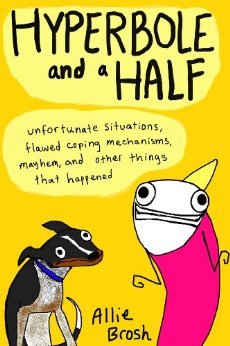 FROM THE AUTHOR: This is a book I wrote. Because I wrote it, I had to figure out what to put on the back cover to explain what it is. I tried to write a long, third-person summary that would imply how great the book is and also sound vaguely authoritative – like maybe someone who isn’t me wrote it – but I soon discovered that I’m not sneaky enough to pull it off convincingly. So I decided to just make a list of things that are in the book:
* Pictures
* Words
* Stories about things that happened to me
* Stories about things that happened to other people because of me
* Eight billion dollars*
* Stories about dogs
* The secret to eternal happiness*

*These are lies. Perhaps I have underestimated my sneakiness!

How do I review Hyperbole and a Half? The last time I reviewed a book-that-used-to-be-a-blog, it was Jenny Lawson’s, and I was not a regular reader of her blog, so I was able to treat the book like a standalone. In this case, I’ve been a loyal “Hyperbole” reader ever since I first read about the Alot in 2010 (spoiler alert: the Alot isn’t in this book, and it really should be, but on the other hand it’s accessible on the original blog always for my viewing pleasure, so there is a really simple solution to the problem) so I already knew I would love this book. I relate hugely to Allie Brosh’s sense of humor and find her rudimentary art to be rather succinct in its simplicity.

Classic favorites include both parts of Tales of Depression, Dogs Don’t Understand Simple Concepts Like Moving, This is Why I’ll Never be an Adult, and The God of Cake. My favorite new chapters, in terms of achieving that transcendent balance of relate-ability and humor at which she seems so adept, are the chapters about identity. She examines whether she is a fundamentally good or shitty person by questioning her motives whenever she does good things, and she discusses how she does this thing where she gets to call herself a good person just by thinking about a good thing that she might do. To write that down, as I’ve done here, and indeed as she notes in the book, seems like a really awful admission, but I wager that basically everyone does that kind of rationalization all the time, but Allie Brosh picks that uncomfortable truth out of the morass of conflicting thoughts in our minds and identifies it so keenly, and so humorously.

In short form, everyone should read Allie’s fabulous blog and fabulous book.