Help us make this our biggest #GivingTuesday ever. We have raised $578 today alone!
> FAQ Home
> Genre: Biography/Memoir > I am sure there are other versions of happiness, but this one is mine. 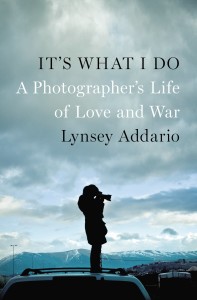 I saw Lynsey Addario on The Daily Show promoting her book: It’s What I Do: A Photographer’s Life of Love and War (2015). Jon Stewart was obviously impressed, and even though Addario is just 41, she seems to have already lived a remarkable life. On the show Addario talked about photography, getting kidnapped in Libya, and the struggle to balance her work with being a wife and mother.

Because Addario’s photographs are scattered throughout this book, I’d recommend reading the hardcover book rather than the Kindle version. I don’t know how well those would come out in an e-book. And I would recommend this book. It’s a glimpse into what it takes for us [the privileged people lucky enough to be born in peaceful, developed countries] to see what’s going on in the rest of the world. Even with the pictures, it’s often too easy to forget how people are struggling for their lives in other parts of the world. I find it remarkable that journalists and photographers choose to risk their lives to get these images to us. Even if they escape physical harm, the psychological toll is still extreme. Perhaps what struck me most was Addario’s dedication to her job, giving up stability and comfort to follow wherever violence and suffering led her.
Addario introduces us to her life as a child growing up in an unconventional household. As soon as she could, she was traveling and photographing, living first in South America and then in Turkey as she gained professional experience. She’s been in incredibly dangerous situations and describes both the dulling of fear in the war zone as well as the camaraderie in the international journalism community.
In addition to an inside look into war photography, Addario has the unique perspective of  being a woman in a very male-dominated field. Addario’s gender sometimes became an issue when she was groped taking photographs or trying to get access to Taliban members. But it also made personal relationships very difficult. Many of the male journalists had long-term relationships with women waiting for them back in the States, but men were less willing to tolerate the danger, schedule, and constant traveling required of Addario. When Addario finally found her perfect partner, one who supported her work, she struggled with the idea of motherhood and how that would impact her career. “I tried to imagine my life as a mother–struggled to envision a female role model in conflict photography–and I couldn’t think of a single female war photographer who even had a stable relationship.” (312)
I enjoyed this book more than I was expecting, and it changed my perspective in some ways. If I had any criticism, it is that I often wanted to know more as I read. Many of the photographs did not have captions. Even though these photographs fit into the general narrative of the book, I wanted to know more specifics. There were also a number of situations in the book where I would have preferred more contextual information: either about Addario’s feelings, the situation on the ground, the people she’s photographing, or what happened to them after. I realize, however, that photographs are just one still moment, a glimpse into people’s lives. That glimpse can be powerful and informative even when it doesn’t give us all the information–just like this book.

Find all of my reviews here.